Rotary Club Trains Secondary Schoolgirls On Self Defence In Rivers 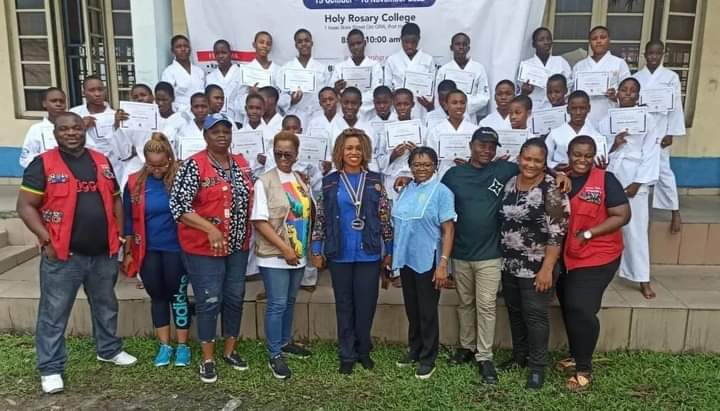 The Rotary Club of Port Harcourt GRA in Rivers State, has trained students of Holy Rosary College, Port Harcourt, on self defence skills as well as on how to give first aid treatment.

Speaking with journalists at the closing ceremony of the training in Port Harcourt on Sunday, President of the Rotary Club of Port Harcourt GRA, Ozumonu Gudu, said the programme was in conjunction with Zen Budo Karate.

Gudu, who expressed the hope that the training given to the girls will multiply in future thereby creating a safer society, said: “It was a four-week intense training for young girls in Holy Rosary College, Port Harcourt. It was in partnership with Zen Budo Karate group.

“The young girls were trained on how to defend their selves when attacked. The training also include first aid skills. Doctors in or midst taught these girls how to offer first aid to anybody maybe in school or at home when there is any danger.

“You know there is a saying that when you train a girl, you train a nation. We believe that these skills handed to these girls will multiple in future because these girls will train their children and family members. In that way, we will create a society that is safer.”

Oruamabo said: “What we are doing here today is a girls’ empowerment programme, which is being raised by Rotary Club of Port Harcourt GRA. It is a very lovely initiative; when they called to tells us about it, we were excited because being a karate instructor over the years, I have been passionate about getting more females into art.

“We believe that more women should be encouraged to learn self defence because the times we are living in are no more safe times. The more we have such programmes, it is going to create an awareness and make the streets more safer for women.”

In her remarks, the Principal of Holy Rosary College, Port Harcourt, Barrister (Mrs) Veronica Efika, expressed the hope that with the training, the girls were already fortified to defend themselves in the face of attack.

Efika said: “We are so excited to hold this programme here because it is a way of fortifying our younger ones particularly the girl-children. We are really in the world of insecurity, world of so many vices and everybody not just the boys alone, the girls need to be strong to be able to defend themselves at any point of attack in any form.”

Also speaking, one of the students, Okeke Chinonso, thanked Rotary Club of Port Harcourt GRA for giving them the training, saying that the skills acquired will help them in future.