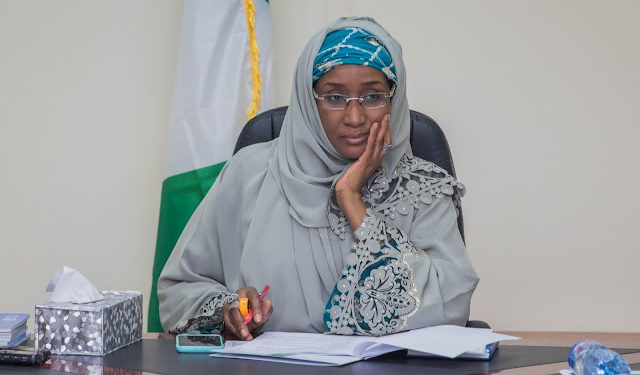 On Monday, August 9th, 2022, I came across a publication in the Daily Trust newspaper regarding Hajiya Sadiya Umar Farouq and her supervision of the Federal Ministry of Humanitarian Affairs, Disaster Management and Social Development. The publication was in the form of an Advertorial titled, ‘Why Sadiya Umar Farouq Should Be Removed From Office.’ Reading through the advertorial, I was saddened because it was laced with what I know to be pure falsehoods.

In the advertorial, there were callous allegations against Sadiya Umar Farouq. The denunciationsaccused her of allegedly using humanitarian, and disaster assistance means for the people in need that were affected by disaster in Bauchi State and meddling into Bauchi politics”. It went further to say that she was diverting social programs meant for the benefit of the whole country to Bauchi state all in the name of influencing her husband’s gubernatorial ambitions”. In addition, she was accused of doingnothing to help the women and children of her state from the issues bedeviling the existence of victims of terrorism, banditry, and kidnapping in her native Zamfara and several other places in Nigeria”.

Reading the advertorial, it came across as a malicious attempt to malign Hajiya Sadiya. Having knowledge that the claims made in the write up was full of falsehoods, there was a responsibility to set the record straight on the specific issues raised in the piece and put into the public space the correct and relevant information, as far as I know. It was important to do so because it seemed apparent that the reason for the piece was to target Hajiya Sadiya, malign her and discredit both her character personally and professionally. But beyond that, it also seemed to be a political hatchet job aimed to ambush the legitimate aspirations of her husband as he participates in the gubernatorial election in Bauchi State.

Contrary to the accusations enunciated in the publication, Hajiya Sadiya has put all her energy into the delivery of her duty as a Minister. From the beginning of her appointment as a Minister, she has applied herself with utmost good faith and endeavored to respect the oath of her office. Evidences andrecords of the activities and achievements documented by her stewardship are available and public record for all to see, especially in regard to the accusations against her made in the publication. She has traversed the length and breath of Nigeria to provide succor to the beneficiaries of her programs and to the most vulnerable in the society. And to malign her in the way that the advertorial did as a way of political mudslinging, is just not necessary.

For further clarification regarding the N-Power program raised in the advertorial, the North East has a total number of 167,412  N-Power Beneficiaries with only 31,942 coming from Bauchi while a total number of 1,603,617  pupils are currently being fed under the Home Grown School Feeding Programme with 444,099 coming from Bauchi. The advertorial attempted to plant seeds of discord by suggesting that south-easterners accused Hajiya Sadiya of nepotism in the allocation of the federal government’s Stimulus packages to it’s Citizenry in order to cushion the negative effects of the economic and social lockdown over the Coronavirus pandemic.

The fact is, all Social Investment Programmes are for the most vulnerable Nigerians across the country; from the South East, South West, North West, North East, North Central and South South. There is no discrimination against any tribe or religion, rather, the NSIP interventions are distributed across border based on the Multidimensional Poverty Index MPI. The total number of pupils feeding in School feeding program in the South East are 778,450 while the N-Power beneficiaries are 136,629.

The allegation that over 80,000 N-Power beneficiaries were yet to receive their stipends for 5 months is incorrect. The five months allowances owed 14,021 was ‘flagged’ in March 2020 by the Federal Government Payment system Government Integrated Financial Management Information System (GIFMIS ) for various reasons including; Beneficiaries having multiple accounts and  Beneficiaries’ accounts receiving payments (salaries and allowances) from Federal Government’s Ministries, Departments and Agencies   ( MDAs) or as permanent employees or for participating in other schemes. In Bauchi State, 191 Beneficiaries of such, flagged by GIFMIS have been cleared, paid and exited from the programme.

Available data shows that Batch C  N-POWER beneficiaries were divided into two streams; C1 and C2. Batch C1 were deployed in September 2021 and are due to exit the programme this August 2022 after spending 12 months in the programme. The payment system is transparent and verifiable using the FECs approved NASIMS platform where each beneficiary sees on the platform,  reasons for payment and if there is any reason for non-payment owing to truancy or transaction failure.

The batch C2  pre-selected applicants have concluded their physical verification exercise using one of our strategic partners (NYSC). The deployment process commenced on the 1st of  August for 490,000 beneficiaries to fill the space of one million N-POWER beneficiaries as approved by Mr President. Deployment is handled by the State Focal Persons to ensure that beneficiaries are deployed to PPAs closer to them. All the 36 States and FCT have all received the batch deployment schedule that commenced on 1st August, 2022.

Hajiya Sadiya has vowed to remain relentlessly committed to actualizing the objectives for which the Federal Ministry of Humanitarian Affairs, Disaster Management and Social Development was set upfor. She refuses to be deterred by the antics of her detractors in discharging her duties without fear or favour to all Nigerians, irrespective of political, religious, ethnic or any other considerations.

For the most part, it seems apparent that whichever quarter the smudge campaign against Hajiya Sadiya is coming from, she remains steadfast in order to actualize her assignment till the end of her tenure and give vulnerable Nigerians the deliverables she has pledged, that which she swore an oath to.