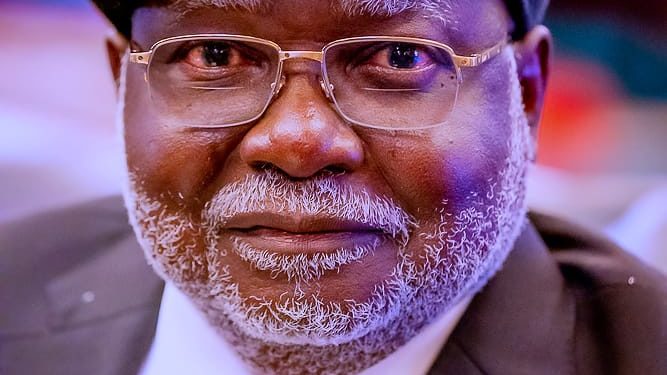 The change of musical chairs that started with the easing out of office of Justice Walter Onnoghen as Chief Justice of Nigeria (CJN) in 2019 has thrown up Justice Olukayode Ariwoola who takes over from Justice Ibrahim Tanko Muhammad in that capacity.

His emergence also sets a record in the judiciary as Nigeria produced three CJNs within a period of three years from 2019 to 2022. This, in the opinion of this newspaper, is sufficient proof that all is not well with that arm of government.

Public opinion is widespread that whatever infamy that the Supreme Court and, by extension the judiciary, has fallen into is, majorly, self-inflicted. A predilection to do the bidding of the political class exposed that arm of government to a tendency that has, significantly, eroded its image in the minds of well-thinking Nigerians. So, as Justice Ariwoola takes over, and while he is waiting to be confirmed by the Nigerian Judicial Council (NJC), he will be expected to embark on a process of cleansing the temple of justice seemingly polluted by the indiscretions of its priests.

Having said this, it is pertinent to recall the primary duties of the Chief Justice of the Supreme Court who is also the nation’s number one Judicial Officer. Therefore, and by definition, the Chief Justice of Nigeria has the following major functions which include but are not limited to overseeing the activities of the judicial arm of the government of Nigeria. It is also his duty to protect the laws of the country, spotlight the mistakes of other arms of government and correct same, ensure that there is reduction of congestion of cases in the court while working to ensure that the acknowledged independence of the judiciary is protected in addition to presiding over the country’s Supreme Court and the National Judicial Council.

The concern of this newspaper is, as the new CJN takes over the mantle of leadership of the nation’s foremost judicial institution, his role as it affects the dispensation of justice, especially in relation to the proverbial common man, ought to be given a pride of place in his list of priorities. This comes to mind with the assumption by most that the Supreme Court, in recent years, has been hijacked by politicians.

The allegation is that because this class of citizens has the clout and resources, they use same to sway the Supreme Court to do their bidding while ordinary Nigerians, with less exposure to influence peddling, will have to wait, almost interminably, for attention to be given to their cases and in the process, justice is not only delayed but denied. We expect him to change this unpleasant narrative.

Some judgements of the apex court have tended to rub off negatively on the image of the Supreme Court in particular and the judiciary in general especially with the misuse and abuse of court processes by lawyers in cahoots with the Justices themselves. The new CJN is expected to act swiftly to redress this anomaly and restore the institution to its pristine glory. It is a tough task, in our opinion,  but it is doable as the nation enters into a critical phase in her democratic journey.

It is important to observe that the new CJN, prior to his appointment, was one of the Justices who laid bare, in a petition, the inadequacies and shortcomings of that arm of government. That is to say, he is not new to what the real problem is. To that extent, it can be said that he has his job cut out for him.

Prominent among the issues that he will be expected to tackle frontally is that monster called corruption. Legal experts within the Nigerian Bar Association (NBA) argue that there is need for mechanisms to be put in place to ensure that the Judiciary is providing the necessary template to other arms of government on transparent procurement and budgeting. They are, particularly, worried by the perception that the judiciary, with reference to the Supreme Court, is not accountable to anyone and is not self-regulating. We note with sadness, that within the last three years, two Chief Justices were linked to corrupt practices, serious enough to contribute to their exit from office.

What this entails, in our view, is that the new CJN has a lot of reassuring to make in connection with what right thinking Nigerians believe about the Judiciary and what is the reality on ground as far as operations of the Supreme Court is concerned.

This newspaper considers it disheartening that because of the alleged inappropriate actions of some judicial officers, the entire institution may have run out of the zeal to point out the mistakes of other arms of government and correct same. We urge Justice Ariwoola to see this as an urgent task that must be carried out sooner than later in a justified haste to restore the image and dignity of this arm of government that once made the African continent proud.