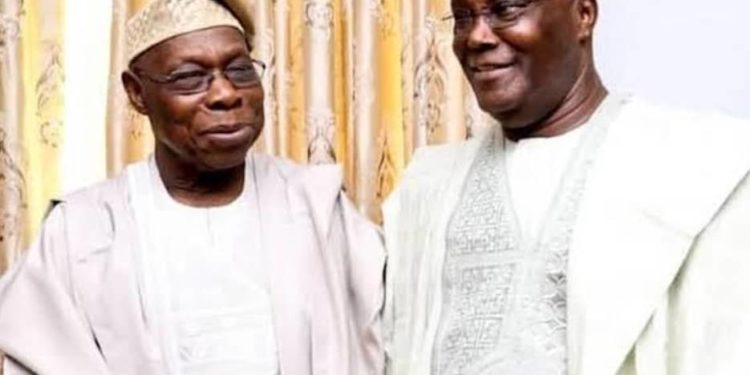 A political support group for Alhaji Atiku Abubakar, has said that the Peoples Democratic Party (PDP) presidential candidate for the 2023 elections was a blessing to the country when he was the Vice President to former President Olusegun Obasanjo between 1999 and 2007.

In a statement on Sunday signed by the national publicity secretary of Atiku Support Organisation (ASO), Dr. Victor Moses, the group described Atiku as “the best vice president Nigeria has ever had since 1960 independence.”

The group was reacting to a statement by former President Obasanjo, on Saturday, who said he made a mistake in the choice of his presidential running mate ahead of the 1999 presidential election.

The former President, who was apparently referring to Atiku in his statement, said: “One of the mistakes I made was picking my number two when I wanted to become the President. But because it was a genuine mistake, God saved me.”

But, reacting to Obasanjo’s assertion, the pro-Atiku group said, “We watched with dismay a video purportedly showing the former president of Nigeria, His Excellency, Chief Olusegun Obasanjo stating that one of his mistakes in life was his choice of number two man during the 1999 presidential elections.

“We wish to state without mincing words that former president Olusegun Obasanjo was the best president we’ve ever had as a nation since 1999.

“Similarly and without equivocation, His Excellency Atiku Abubakar, the Waziri Adamawa was, without a modicum of doubt, the best vice president Nigeria has ever had since 1960 independence.

“His Excellency, Chief Olusegun Obasanjo may recall that Nigeria under Atiku Abubakar as the head of the economic council experienced its best economic growth in history.”

The group went on to state that the economy was significantly boosted during the Obasanjo/Atiku administration and beyond.

“Therefore, we ask. How could someone with such an intimidating pedigree and best profile in economic management and development of a nation be a mistaken choice of a vice president?

“We called on His Excellency, Chief Olusegun Obasanjo, to see his decision to work with Atiku Abubakar as his number two man as the best decision ever made in the overall interest of Nigeria and not a mistake.

“His Excellency, Atiku Abubakar is vindicated because archival facts and figures are out there to prove that he was indeed the best vice president we have ever had since independence in 1960,” the group stated.

Adebiyi, Others To Deliberate On Effective Mgt Strategies For SMEs

Adebiyi, Others To Deliberate On Effective Mgt Strategies For SMEs