* As 4,770 terrorists surrender in Borno 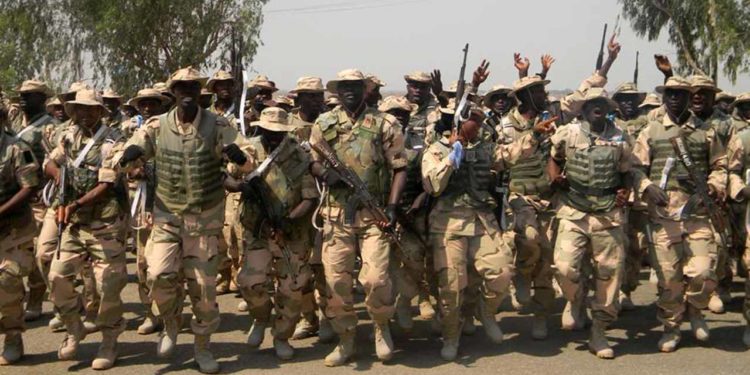 The Defence Headquarters (DHQ) has said that its airstrikes conducted in Zamfara State eliminated 82 bandits on on Wednesday, June 22, 2022.

The Director, Defence Media Operations, Major General Benard Onyeuko, who disclosed this during the biweekly update on the Armed Forces of Nigeria operations between June 16-30, 2022, also said 4,770 terrorists surrendered in Borno State in the period under review.

General Unyeuko said troops of Forward Operation Base Bakura in Zamfara State under Operation HADARIN DAJI on June 21, 2022 responded to distress call of terrorist activities at Rafin Dankura in Bakura local government area of the State, where they engaged the terrorists in a shootout.

He said that the terrorists were trying to abduct innocent civilians, adding that after the encounter, troops rescued the six  kidnapped civilians and neutralised two bandits in the process and recovered two AK 47, one 36 Hand grenade, two Cell phones and N211,915.00.

Similarly on June 21, 2022, troops made contacts with marauding terrorists at Maigora in Faskari local government area of Katsina State and neutralised two terrorists in the process.

He noted that the Air Component of Operation HADARIN DAJI on June 22, 2022 carried out air interdiction  at Kofar Danya village in Bukkuyum local government area of Zamfara State.

He said the airstrike was executed following report of planned attack on Kofar Danya Vvllage, adding that “the air component mobilised to the location and sighted over 150 terrorists converged under a thick vegetation.”

“Consequently, credible feedback from the locals around Kofar Danya disclosed that over Eighty Two (82) of the terrorists suffered heavy casualties as many of them were neutralised while other sustained various degree of injuries,” he said.

Similarly, in the North-East, he said troops of Operation HADIN KAI rescued abducted persons, neutralised terrorists, and arrested  terrorist members in the period under review.

The troops also arrested some terrorist collaborators and logistics suppliers on June 21, 2022.

“Also, members of Boko Haram terrorists have continued to surrendered to own troops at different locations in the theatre between 1 – 15 June 2022 a total of 4,770 of them comprising 864 adult males, 1,415 women and 2,490 children,” he explained.

He said all surrendered Boko Haram Terrorist/Islamic State West Africa Province terrorists and family members were profiled and documented while all arrested and recovered items were handed over to the appropriate authorities for further actions.