In this report, HENRY TYOHEMBA writes on the growing concerns of parents and other stakeholders following the security threats and the ripple effects from the closure of schools in the country. 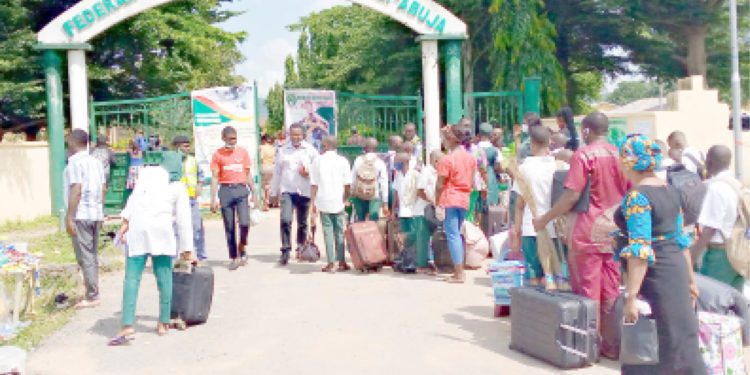 Sadly, the recent attacks on schools and the fear of impending attacks is forcing the government to close schools, thus worsening the learning outcomes in the country.

Previously, over seven states in northern Nigeria reportedly shutdown schools due to the rise in abductions and banditry in the region, the development which experts raised concerns that it may worsen the number of out of school children.

However, a few days ago, the federal government ordered the immediate closure of some of its Unity Colleges over security threats. The decision was as a result of rising insecurity and threat to the lives, properties and well-being of the students therein.

The order to close the schools was given by the Minister of Education, Adamu Adamu, following a security breach on Sheda and Lambata villages, suburbs of Kwali Area Council which also threatened federal Government College (FGC), Kwali.

While some schools had directed students to vacate at the latest on Wednesday, July 27, 2022, other schools disseminated messages to parents on Sunday asking them not to fail to come pick their children on Monday, unfailingly, due to rising fear and anxiety emanating from reported threats.

Although the measure taken to safeguard the lives of students by closing the schools is paramount, its closure, according to experts, may have adverse effects on the learning outcomes of children.

The new development has, since stopped the ongoing third-term examination in the school and the Senior School Certificate Examination (SSCE) by the National Examinations Council (NECO), even though the government said it would communicate to the students how and when they would sit for the examinations they may miss as a result of the abrupt shutdown.

Already, the United Nations Children’s Fund (UNICEF), earlier this year, raised the alarm that Nigeria is facing a learning crisis.

The UN agency disclosed that 70 per cent of Nigerian children are going through a learning crisis, as statistics from the ‘Learning Crisis in the Nigerian Literacy of 2021’ revealed that 53 per cent of 10-year-olds could neither read nor write.

With the recent development, where schools are closed for fear of attack, children are automatically deprived of opportunities for growth and development. The disadvantages are disproportionate for under-privileged learners who tend to have fewer educational opportunities beyond school.

A parent in Kwali, who identified himself as Joseph said school closures carry high social and economic costs for people across communities. Their impact however is particularly severe for the most vulnerable and marginalized boys and girls and their families.

“The resulting disruptions exacerbate already existing disparities within the education system but also in other aspects of their lives,” he said.

Speaking with journalists when she came to pick her child at FGC, Kwali, a parent, Mrs. Babep Peace, lamented that it was quite unfortunate that the exams of her children had been disrupted, but it was better to take them home safely.

“It was at 4pm on Sunday when one of my daughters called me through her guardians’ phone that the management asked parents to rush down to evacuate their children because of threat by suspected bandits to attack the college.

Lagos 'll Work For All If I Emerge Governor - Rhodes-Vivour