* Says PDP crisis will be resolved 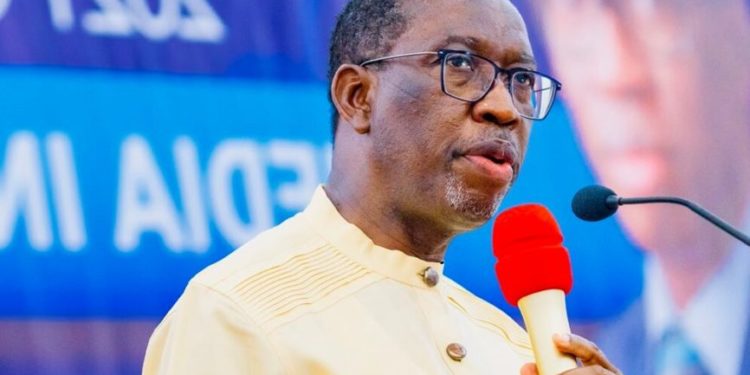 Okowa disclosed this to State House correspondents on Thursday after meeting with the Vice President, Yemi Osinbajo, at the Presidential Villa in Abuja.

Asked to assess his party’s preparedness for the forthcoming Osun governorship election, Okowa said, “A lot is being done. We look forward to the elections. I’m sure the APC would expect a stiff competition. We agree that they are the government in power in that state but they will be definitely expecting a very stiff competition from us. We are poised to take back that state.”

He also disagreed with a recent call to arms for citizens of Zamfara State for self defence by the Zamfara State governor, Bello Matawalle.

According to the Delta State governor, “I think they need critical thinking because you have to also be in a position to examine the recommendations being made. When recommendations are made and you have not thought through it in full about the consequences of such, then it is also a problem.

“It is out of frustration that such recommendations are being made, no doubt. But when you ask for everybody to carry guns, you must ask yourself, are Nigerians in the mindset where every single individual can carry his own gun? You will be surprised that with every little argument people will just snuff themselves out.

“It’s a cause for concern when we hear that kind of recommendation. But the real thing is people are frustrated and he (Governor Matawalle) is also frustrated to the extent that he thinks that is the way to go. I don’t think that is the best recommendation at the moment.”

He posited that with the insecurity biting hard, the government must address the challenge holistically, with a long-term strategy in mind.

“I think we need to begin to look into many other things. Yes, as a quick one, he’s calling for that. But there will be consequences. But we need a long-term approach to deal with insecurity. We need to look at the foundation of the problems that we have. A lot of hunger, joblessness, a lot of people are losing hope. And when you look at all these issues, it brings a lot of frustration. So, we have to address it holistically,” he said.

He said there were series of meetings and consultations just as he assured that the crisis would be resolved with the party coming out stronger ahead of the 2023 general elections.